Rome is the capital and largest city in Italy. It is one of the most important cities in the world in terms of history and culture, as it was at the heart of the Roman Empire and is the centre of one of the world's major religions. Although it has relatively 'new' attractions like the Trevi Fountain and the Spanish Steps, the city is mostly known for its older magnificent buildings and ruins, like the Colosseum, Pantheon and the Forum Romanum. And if that is not enough, you can always visit another country, right in the middle of the city: Vatican City, the residence of the Pope, which is known for its huge basilica, St. Peter's. Of course, like any other Italian city, you can enjoy good cappuccinos, pizza and pasta in Rome as well. Or just sit down and relax for a while enjoying a fresh beer or good vino (wine!), after walking from one highlight to the other, because that's what Rome is all about.

123Carhire.eu will compare all the top car hire providers to find you the very best deal on your car hire at Rome Airport, Italy.

We specialise in car rental in Fiumicino (Leonard da Vinci) airport or Ciampino airport and other destinations in Italy. Book your car hire at Rome, Italy from 123CarHire.eu

When visiting Rome don't forget to see and experience the museums, galleries, Bars, Lounges, Restaurant and vibrant cafe society of this area!

The Colosseum is not the oldest, nor the biggest Roman arena (the Circus Maximus could hold 5 times as much people), but it is the most famous Arena and one of the biggest landmarks in Rome for sure. It was opened in 80 A.D., and the inauguration of the arena lasted for a 100 days. The stadium could hold up to 50,000 people, who came to watch the fights between man and animal, and man versus man. In general the fighters were slaves, prisoners of war, but also volunteers. The floor of the arena could be flooded for the occasional sea battle.

In the middle ages the Colosseum, was transformed into a fortress. During the centuries it was damaged a couple of times by earthquakes, and it was also used as a quarry for marble, that was used in the construction of several palaces and churches in Rome. It also became a holy site that served as church, monastery and general place of worship. In the last century the traffic, the metro and concerts also caused damage. To this day though it was one of the most recognized images in the world and any visit to Rome is not complete without a trip to the Colosseum. 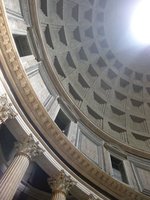 The Pantheon is the best-preserved ancient building in Rome, the building we see today dates back to 120 A.D. The original building was older, but was destroyed and rebuilt by Emperor Hadrian. On the outside you see 16 columns that were made in one piece in Egypt, and transported to Rome. Inside the most impressive sight is that of the dome. Until the renaissance it was the biggest dome in the world, and it was the bases for the dome that Michelangelo built for the St. Peter's. In the middle of the dome, you will see a big hole, which is the only source of light for the building. When it rains holes in the floor make sure that the water, makes it way out.

The floorplan of the Pantheon is still the same as in Roman times, and most of the inside of the building is still the same, except for the statues of Catholic saints, the tomb of Raphael, and the tombs of 2 kings of Italy. (Victor Emanuelle II and Umberto I.)

To many the Roman Forum may just look like a huge field littered with rocks, but you have to remember that this once was the focal point of an empire that lasted a thousand years. Entrance to the Forum used to be free, but is now included in the ticket for the Colosseum and the Palantine Hill. The Forum was layed out along side the Via Sacra, which leads from the Colosseum to Capitol Hill.

In the Forum you will find several sights of interest : 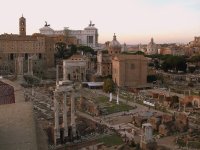 The Capitoline museum (Musei Capitolini) was created in 1471 when Pope Sixus IV donated a group of bronze statues to the people of Rome. These statues are still and important part of the collection. This collection includes the statue of the she-wolf, with under it the twins Remus and Romulos (although the boys were added later.) that symbolises Rome. A copy of this statue can also be seen on the square. A new part of the museum was created to hold the famous statue of Marcus Aurelius on a horse. This statue was the focal point of the Piazza de Campidoglio, but it was moved inside to perserve it better. The rest of the collection mainly focusses on statues and paintings. The are exhibitions usualy on the second and third floor of the Palazzo del Conservatori. (sometimes dubbed: Palazzo Clementino). 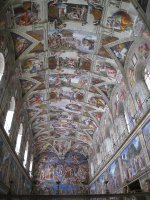 While Vatican City is an independent sovereign state, it happens to be located entirely in Rome, on the west bank of the Tiber. You don't need to show a passport to enter, but you will have to pass yourself and your bags through X-ray scanners. And be prepared to queue.

Even ignoring the Sistine Chapel, the Vatican Museums are some of the most important museums in the world. The Vatican has a superb gallery, excellent Roman and Etruscan collections, and plenty more. Be sure not to miss the appartments that were decorated by Raphael. There is too much to see if you plan on going to the museums for one day. If you go one day, you just have time for the highlights. The highlight of the visit to the museums is the The Sistine Chapel known for Michelangelo's two most famous masterpieces: the ceiling, depicting numerous scenes from the Old Testament and the Last Judgement, occupying the entire wall behind the altar.

St Peter's Basilica is the centre of the Catholic faith, the richest and most important church in the world. Built on top of the remains of St. Peter. The views from the top of the Dome, 130 metres above St. Peter's Square, are wonderful. The entrance to the stairs and the elevator are on the rightside of the Basilica, were you will also find the entrance to the Vatican Grotto that holds the remains of many popes including John Paul II, who died in 2005.

You can find more detailed information about the sights in Vatican City in the article about Vatican City. 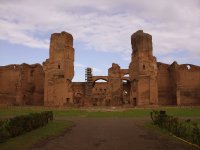 The Baths of Caracalla was a huge complex of Roman public baths, or thermae, built between 206 and 216 A.D. The name comes from Emperor Caracalla, the oldest son of Septimus Severus. Today the ruins that are still standing gives you an impression of how big this complex must have been. It is guessed that it could hold 1,600 visitors at the same time, and it would have had around 7,000 to 8,000 visitors each day. The baths were decorated with some beautiful sculptures. Many of these ended up in the Farnese collection, and can still be seen in several museums. The most famous one is the so called Farnese bulls, that is at the Museo Archeologico Nazionale di Napoli. The Ruins are opened on weekdays from 9:00am till 7:30pm (last entrance at 5:30pm, on Mondays from 9:00am to 2:00pm).

In Rome, tourists ask for a menu but locals ask "what are you serving today" (but in Italian of course). This is the only way to guarantee that you are eating what is fresh and recommended by the locals. If you only have time and money to eat at one place in Rome it must be Sora Margherita (Piazza delle Cinque Scole 30). Don't blink because you will miss it. Also, it doesn't have a sign on the outside - only blue ropes hanging in the doorway. It is open for lunch from 12:00pm until 3:00pm and then for dinner on Friday and Saturday night but reservations are required. Eat everything they give but especially do not miss their Roma-Jewish style artichokes, meatballs, zucchini quiche and whatever they recommend for dessert (it is guaranteed to be delicious).

Having said that, food in Rome can be very expensive, especially if you are eating near any of the city's many tourist attractions. Restaurants (and sometimes bars) often impose a cover charge (between €1-2) per person as soon as you sit down, and drink prices are arbitrarily inflated close to tourist attractions which can bring a nasty surprise along with your bill. Make sure you know what cover/bread/service charges are levied before you order and always order drinks from a menu so you know how much it costs - an example would be one cafe near the Vatican that charges €6 for a 500ml Coca Cola!

Be aware that there are strange rules governing what is served in different establishments in Italy. A restaurant will impose a cover charge and may not let you just sit down for dessert and coffee if you have not eaten the rest of your meal there - you may be told to go and find a bar instead. It becomes really confusing when you order apertivi at a bar/restaurant only to be informed that they have stopped being a bar for the night and are now only serving sit down meals (with cover charge, of course). As a general rule, a bar serves drinks and quick snacks like sandwiches, an osteria is similar to a bar but generally serves more interesting food, and a restaurant serves only sit down meals.

If you are travelling on a budget, self-catering is a fantastic option in Rome. Most supermarkets stock large ranges of fresh meats, cheeses, fruit and vegetables. A lot of it is available in small, economical portions, or per kilogram from the delicatessen area, that make it very cost effective if you are only shopping for one or two people. With the large range of prepared antipasti and meats like prosciutto and salami available, it is not even necessary to have access to an oven or hotplate.

Also, try to find out where the local fresh food market is. It will enhance your experience of any foreign city to get amongst the locals as they do their daily shopping. You will be able to see what they buy and the produce will generally be a little fresher and cheaper than what you can get in the supermarkets.

Once you've got all your fresh local ingredients, grab a bottle of local wine to compliment the meal. Italy is the world's biggest producer of wine which means there are a lot of very drinkable wines on the shelves for excellent prices, often under €5!