Florence is the capital of the region Tuscany in Italy and considered one of the most beautiful cities in the country. Famous for its art and architecture, this city of 400,000 inhabitants is viewed as the birthplace of the Italian Renaissance, home to such famous Florentines as Leonardo Da Vinci, Michaelangelo and Machiavelli. Steeped in ancient history, it's little surprise that the historic centre of Florence was declared a Unesco World Heritage Site in 1982.

The famous Duomo (Cathedral) is an icon of the Florence skyline and a great place to get a magnificent view over the city. Other well-known sites include the Santo Spirito church, Giotto's Bell Tower and Ponte Vecchio.

123Carhire.eu will compare all the top car hire providers to find you the very best deal on your car hire at Florence Airport, Italy.

We specialise in car rental in Airport of Florence and other destinations in Italy. Book your car hire at Florence, Italy from 123CarHire.eu

When visiting Florence don't forget to see and experience the museums, galleries, Bars, Lounges, Restaurant and vibrant cafe society of this area!

The city of Florence itself is an amazing sight. Just looking at and wandering around the stone buildings and narrow streets makes one wonder about the old days. But the problem is Florence has so many sights that unless you intend to spend a month there it will be difficult to see everything. Therefore this section has been broken into "Must See" and "Other Sights and Activities." And even then this is only a fraction of the sights you can see in Florence. Some of the sights are described in more detail. 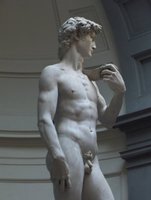 The statue of David is one of the master-pieces by Italian artist Michelangelo. It depicts David before the fight with Golliath, which was very uncommon, as around that time David was always depicted after the fight. The statue is made out of white marble. Work of the statue has begun in 1464, but several artists failed to complete the statue. It was young Michelangelo, he was 26, who convinced the commissioners that he could complete the statue of David. in 1501 he started where the others had left it, which was basically some rude shapes, and some worked out details of the feet. He would work on the sculpture for 2 years, before it was finished. The statue was unveiled at the 8th of September 1504 and placed outside of the Palazzo della Signoria. At the place of this original sight, now stands a copy, while the original is located at the Galleria dell' Accademia. It is recommended to reserve tickets (especially during holidays) if you want to avoid a long queue. Although at the Galleria dell' Accademia the David is the only thing worth seeing, if you go about 30 minutes before closing there will be no line on most days.

The Ponte Vecchio ("Old Bridge") is a bridge that crosses Arno River which is covered with little high end jewelry shops, art dealers and souvenir sellers, and a famous meeting place for lovers. The bridge is a Medieval stone closed-spandrel segmental arch bridge and originally, butchers occupied the shops. The Ponte Vecchio's two neighbouring bridges are the Ponte Santa Trinità and the Ponte alle Grazie. The bridge spans the Arno river at its narrowest point and consists of three segmental arches: the main arch has a span of 30 metres and the two side arches each span 27 metres. No one knows why, but the Nazis did not destroy the Ponte Vecchio in World War II, even though they did destroy all the other bridges in Florence. Instead the Nazis blew up everything around the bridge so it could not be crossed.
For more information on famous bridges around the world read the article: Famous Bridges.

Other Sights And Activities

The food in Florence is stunning! The key thing is to get off the tourist track and get into the neighborhoods around the old town. It is amazing and it only takes walking a couple of blocks away from the main tourist areas for the food to get better and cheaper.
Gelaterias away from the tourist track are also a must. Gelateria La Carraia, on the other side of the Arno by the Ponte alla Carraia, is one of the best in town (and only costs €1!).